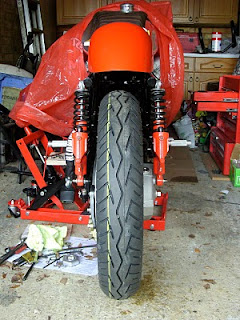 The bike was starting to take on a life of its own and was now a rolling chassis back in my garage.
Now the fine tuning of parts started and final assembly of the bodywork.
All bolts were changed to Stainless thanks to two companies, one is Shaw stainless who I cant thank enough for one off parts and the speed of delivery, excellent, small quality company. Thanks Chris for all the advice and help http://www.shawstainless.co.uk/ 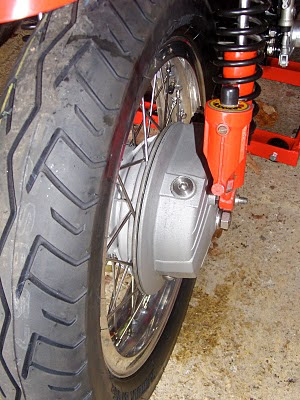 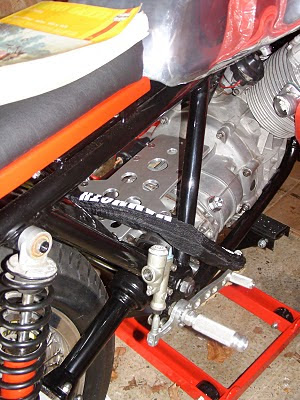 you can make out the engine /gearbox cover in this shot and this was made by a great friend and fellow Guzzi enthusiast Richard Bailey. I have only know Richard since being a member of the local Guzzi owners club (Herts branch), but his help has been invaluable and his engineering skills are second to none. His company in Hitchin (B and B engineering) are able to make pretty much anything that could be made in metal.
Richard has since helped out on numerous other parts that I needed adjusting, cutting down, brackets making (headlights) and just general friendship and interest in the project that has helped me keep going ! Thanks Richard.